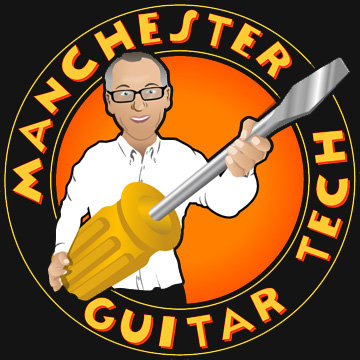 A  regular customer of mine recently bought a 2006 Les Paul and brought it to me for a setup. As soon as I straightened the neck, which had been somewhat bowed, I realised that the 1st string was buzzing against the first fret as the nut had been cut too low. I suspect that the relief had been introduced into the neck to mask this. Anyway. there was no choice but to fit a new nut.

Recent Gibson Les Paul guitars are fitted with Corian nuts. Leaving aside what a poor nut material Corian is (too sticky) for some reason Gibson are using a lot of glue to hold them into the slot. You can even see the excess glue that’s spilled onto the headstock face in the picture below.

Removing the nut is a delicate process – it’s not a matter of just scoring around the edge and taping it out as with the old Gibson nuts.

After scoring around the nut with a sharp blade, I used a hacksaw to cut almost through the nut across its width.

Next I squeezed the two halves together with pliers. The front face of the nut broke off in several pieces.

I was now able to tap the rear of the nut forwards to break its adhesion and lift it out.

Now I could get a blade down between the fretboard and the remaining part of the nut and remove it. You can see that a few wood fibres were stuck to the nut.

Next I cleaned up the base of the nut slot with a special file to make a level seat for the new nut, sized a nut blank and fitted it to the slot.

The string slots were marked out using the Stewmac String Spacing Rule.

Once the nut slots were nearly there, I glued in the new nut with just two dabs of superglue.

As always with Gibson nuts, I re-lacquered the ends, just like the original for a super-smooth, seamless finish.